You can find 8 different owner's manuals for the Kia Cadenza on this page that are in the PDF format.

The years available stretch from 2014 through to 2021 and to view the manual you just click the name to the left (or above if viewing by mobile).

About The Kia Cadenza

Replacing the Opirus/Amanti model as the company’s flagship full-size car in 2009, the Kia Cadenza was eventually discontinued in 2021.

It was sold all around the world mainly as the Cadenza but was branded as the K7 in South-Korea.

The first-generation model was essentially the Kia version of the Hyundai Azera after both company’s started working very closely at the turn of the century.

Inside the car was a surprising amount of premium features for the budget alternative brand of the time including leather seats, Bluetooth connectivity and a satellite navigation system.

2016 saw the introduction of the second-generation model which incorporated hybrid technologies on a wide range of engine choices.

The main engine offering was a 3.3-liter V6 mated to a 6-speed automatic transmission powering the front wheels.

Eventually, the model was discontinued to be replaced by the new fleet of crossover SUVs the company was pushing such as the Niro.

Safety ratings for the car were fantastic, the second-generation model received a 5 out of 5 stars award from IIHS only falling back on child seat anchors slightly. 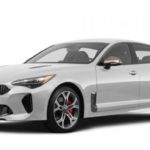