You can find 26 different owner's manuals for the Toyota 4Runner on this page that are in the PDF format. 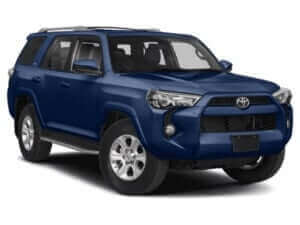 The Toyota 4Runner started its life as a compact SUV but later got reclassified as a mid-size one when it entered its 3rd generation of design in 1995.

In Japan and some other territories, the 4Runner was known as the Toyota Hilux Surf up until 2009 when the range was pulled.

It competes with other compact SUVs such as the Toyota RAV4 and the Honda CR-V in the USA, Canada and other car-buying regions around the world.

If you’re considering purchasing a new or used one, then these owner’s manuals will be your guide to the car.

It will go over all of the features that it has, how to maintain it properly, and what some common problems are with the vehicle so that you can avoid them in your own vehicle.

The original SUV back in the early 1980s was a simple pickup truck with the addition of a plastic shell to house the occupants, over the years the car has been improved and specialized vastly.

Its platform was taken from the massively popular and indestructible Hilux pickup truck that was on sale in the USA until the mid-1990s.

Unfortunately, the rear suspension wasn’t upgraded to cope with the additional weight added to the rear and so the early 4Runners suffered from sagging suspension.

Over the years the car was revised to include safety features such as ABS, traction control and vehicle stability control to make it more appealing to families, a large and lucrative market.

Sales suffered in the 2000-2010 decade, most probably as the choice of engine sizes were limited to large only during a time when fuel prices were rocketing northwards.

As Toyota released the fifth-generation model in 2009 and added much more fuel-efficient engines to the range sales increased quickly to levels not seen before the fourth generation.

All of these complex off-road equipment can be learned about by reading through the Toyota 4Runner owner’s manual for the appropriate model year.

To tailor the level of features inside the car to your own budget you can choose a trim that you feel comfortable with, the vast options include:

Q: Can you get the Toyota 4Runner with a manual transmission?

A: Since 2002, the 4Runner has not been offered with a manual transmission and probably won't be offered with one in the future.

Q: How long does a 4Runner transmission last?

A: Toyota's are known for their reliability and thanks to no obvious transmission issues seen among the owner surveys carried out it seems that failure of that part is rare. Examples of the 4Runner being sold online with over 250,000 miles on the clock also suggest the car can last a long time when properly serviced and cared for.

Q: Is the Toyota 4Runner expensive to maintain?

A: According to RepairPal who surveyed owners of the SUV, the 4Runner has an average maintenance bill of just over $500 per year. This is slightly less than the average when you compare it to other SUVs on the market.

Q: What SUV is comparable to Toyota 4Runner?

A: When shopping around for a 4Runner you can compare it to other similar models such as the Chevrolet Tahoe, Dodge Durango, Ford Explorer and Jeep Grand Cherokee.

A: The Toyota 4Runner is a more expensive SUV because it is engineered to be durable and last a long time. It holds its value better than normal cars because of this and is in high demand with commercial and domestic vehicle buyers.