You can find 3 different owner's manuals for the Toyota Corolla Cross on this page that are in the PDF format. 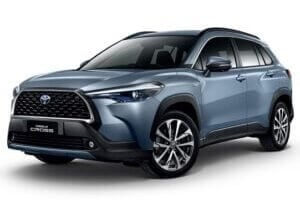 About The Corolla Cross

The Toyota Corolla Cross is the crossover SUV version of the hugely successful Corolla compact car that has dominated roads worldwide for decades.

Every auto manufacturer has tried to launch as many crossover SUV lines as possible in recent years and Toyota is no exception.

You can find the various owner’s manuals for the model years that the Corolla Cross has been on sale on this page.

Alongside this Corolla Cross is the larger RAV4 and the slightly smaller C-HR which both already sell in impressive numbers.

Inside the new car is the same interior used in the normal non-SUV version and underneath is a slightly uprated suspension system to deal with the extra weight.

The car is being offered with an optional hybrid system that uses an electric motor to capture lost energy during braking and recycle it during acceleration.

All models are fitted with a CVT and no traditional manual or automatic transmission option is being made available to customers.

Safety ratings are impressive for the car with it scoring 5 out of 5 stars with ASEAN NCAP across all 3 disciplines.