You can find 2 different owner's manuals for the Volkswagen Taos on this page that are in the PDF format. 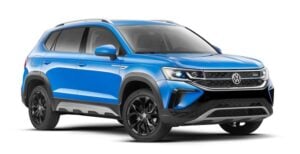 Originally the Volkswagen Taos was released in China as the Tharu but after several years in production, the model has made its way to the USA.

It sits in the already crowded Volkswagen crossover SUV space alongside the similar-sized T-Roc.

Both models are classed as compact crossover SUVs and sit above the T-Cross and below the long-wheelbase version of the Tiguan.

Underneath the Taas sits the same chassis used under the SEAT Ateca and Škoda Karoq, all sat under the Project Tarek umbrella.

The Taos is a versatile vehicle that can be used for commuting to work, transporting cargo, or taking your family on vacation.

Volkswagen created these owner’s manuals to help you get the most out of your new car.

In North America, the Taos is replacing the discontinued Golf for that region as drivers are moving away from traditionally shaped automobiles.

An all-electric version of the car was made available in China during 2020 called the e-Tharu with a quoted range of 258 miles.