You can find 11 different owner's manuals for the Mercedes Benz S-Class on this page that are in the PDF format.

About The Mercedes Benz S-Class

The Mercedes Benz S-Class is a full-size luxury sedan that is considerably bigger than the E-Class.

It is the largest sedan the German automobile manufacturer produces and was first introduced as a model line in 1954.

These vehicles come with a lot of features and can be customized to suit your needs.

There are many things you need to know about owning an S-Class, such as how to open and close the doors or what type of fuel it uses.

You will find this information in the owner’s manuals linked to from this page, separated by model year.

The original car was powered by a 2.2 litre straight-6 engine and was left unchanged for 5 years until its second generation in 1959.

It wasn’t until 1972 when the S-Class as we know it today appeared and it featured luxury features such as independent suspension and disk brakes.

The car was stylish, safe and comfortable and so commanded a high price all around the world.

Engine choices have always been vast for the car and range from modest to performance-focused.

An AMG trim of the S-Class made its first appearance in 1999 where it boasted a supercharged 5.4 litre V8 engine and high-performance brakes and suspension to keep it on the road.

The AMG trim gas continued to make appearances since and proved popular with those wanting the ultimate in luxury and performance.

We are now in the sixth generation of the S-Class and the AMG trim for this evolution contains a twin-turbo V12 mated to a 7-speed automatic transmission.

A limited-edition S-Gaurd version of the car was made available which features armor to withstand small-arms fire and light explosions. 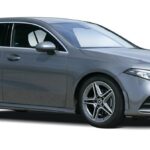