You can find 28 different owner's manuals for the Toyota Avalon on this page that are in the PDF format. 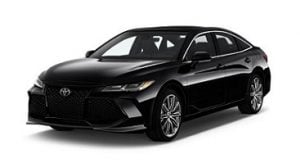 From the year 1994, the Toyota Avalon has been built and sold all around the world though mainly in the USA and Canada.

The front-engine and front-wheel-drive car was originally only offered with 1 engine size (a 3 litre V6) mated to a 4 speed automatic.

Over the years the choice of engines has increased with a hybrid option being added to the roster on the fourth-generation version in 2012.

A hybrid version was able to achieve 40 miles per gallon on a combined cycle helped along by the CVT transmission.

The most recent fifth-generation released in 2018 featured a face-lift to update the appearance and some much-needed technology added to connect mobile devices to the car.

Modern versions have 1 choice of drivetrain, an automatic gearbox (no manual option) but its 8-speed capability ensures that the fuel costs are kept as low as possible.

To make sure that you get the most out of the car be sure to read through the manual for all instructions on how you can properly care for it.

This guide will give you some great tips on everything from maintenance schedules to basic operations.

When purchasing the Avalon you are able to choose from a vast list of trims though including:

Underneath the new Toyota Avalon’s is a platform shared by many other models such as the RAV4 and the Camry.