You can find 14 different owner's manuals for the Toyota Aygo on this page that are in the PDF format. 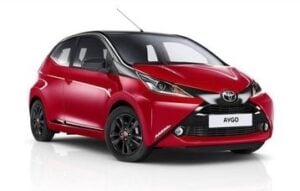 The first Toyota Aygo hit the roads in 2005 alongside its sister brands the Citroen C1 and Peugeot 107.

Eventually, the Peugeot version would be updated and renamed to be the 108 in 2014.

These Aygo owner’s manuals are an important resource that every driver should have close at hand while they are driving around town or on long trips.

All three models are almost identical apart from the badges, they are also all assembled in the same plant in the Czech Republic.

They all sit in the city car segment of the automobile market alongside competitors such as the Renault Twingo and Suzuki Ignis.

Nowadays the second-generation Aygo that was introduced in 2014 is priced at almost double that due to inflation and improved features included as standard.

You can still buy the car as a 3 or 5-door but the two engine options have been reduced to just one, a 1-liter mated to a 5-speed automatic or manual gearbox.

To keep customers happy Toyota offers many different trims for the 2014+ Aygo range including:

In terms of safety features, the modern Toyota Aygo is fitted with stability control, ABS and six airbags as standard.