You can find 13 different owner's manuals for the Volvo S80 on this page that are in the PDF format. 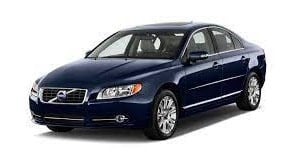 Built as an executive vehicle between the years 1998 and 2016, the S80 was created by the Swedish automaker Volvo.

Replacing the flagship S90, the first generation began production in 1998 and lasted 8 years before drastic updates were made.

In its first decade of sales, Volvo sold over 368,000 models and attributed the S80’s success to its wealth of safety features.

Volvo installed a side impact system along with their whiplash protection, the latter would tighten the seatbelts in the event of a potential collision to prevent the body (and neck) from lurching forward.

The standard 6 straight-6 engine could not fit inside the chassis and so Volvo worked to create their own and subsequently called it the M65 (four variants were built).

A second generation lasted a little longer than the first (a full decade) and was unveiled at the Geneva motor show.

With a new option to add four-wheel drive, customers could buy the S80 with either a 3.2-liter straight six engine or a 4.4-liter V8.

This generation picked up a number of awards, one of the most prestigious being the Insurance Institute for Highway Safety’s ‘Top safety pick’ in 2007.

From 2016 onwards, Volvo changed the platform to start using Ford’s EUCD platform, which it shared with the S-Max, Ford Mondeo and the Ford Galaxy. New safety features were installed, including collision alert, lane departure awareness, blind sport alert, adaptive cruise control and automatic braking. The latter meant that that the car could predict the severity of the potential danger and brake accordingly (either soft or emergency).

An update in 2016 saw the introduction of heated seats, a new air quality system, a glass sunroof and a wood-style steering wheel. Despite these new additions, Volvo went ahead and replaced the S80 anyway with the S90, following a great response at the Detroit motor show.