You can find 5 different owner's manuals for the Kia Ceed (incl. XCeed) on this page that are in the PDF format. 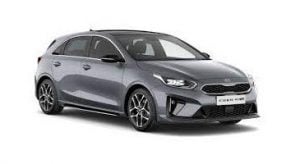 About The Kia Ceed (incl. XCeed)

The Kia Ceed was designed to be marketed in the European market, replacing the Cerato in that region.

It first went into production in 2006 and was known then as roughly the same name but with an apostrophe in it (C’eed).

In 2018 Kia simplified the name and removed the apostrophe while introducing the third-generation version of the car.

The original car was built on the same platform as the Hyundai i30 and was offered with the choice of several gasoline or turbodiesel engines mated to either an automatic or manual gearbox.

It boasted an impressive safety score with Euro NCAP and got the attention of various motoring publications winning many awards.

Many critics praised it as beating many other cars in the same segment including the Volkswagen Golf and Honda Civic.

An estate version of the car was also introduced with an exclusive 2-liter turbodiesel engine.

When the second-generation C’eed hit the roads in 2012 it was notably more expensive and even offered with a sporty trim called the Pro C’eed GT.

This new hot hatch version (the first for the South Korean automaker) boasted a turbocharged gasoline engine and sporty suspension.

The biggest change the car saw (other than the move to a new generic platform) was the option for a crossover SUV version of the car called the XCeed and a shooting brake version called the Proceed.

Now the newer Ceed models shared their chassis with models such as the Hyundai Accent and the Kia Seltos.