You can find 14 different owner's manuals for the Mercedes Benz CLK-Class on this page that are in the PDF format.

The years available stretch from 1997 through to 2010 and to view the manual you just click the name underneath. 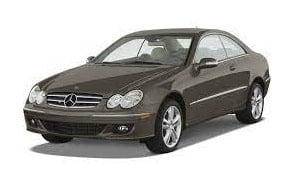 Created as a coupe and a convertible, the CLK-class was a series of mid-size luxury vehicles built by the German car manufacturer Mercedes-Benz.

Manufactured From 1997 to 2010, the CLK was derived from the E-Class and shared the mechanics and underpinnings of its sister vehicle the C-Class.

Sitting between the SLK and the CL, the CLK competed directly with other premium vehicles produced by other German Powerhouses; namely the BMW 3 Series, BMW 6 Series and the Audi A4 cabriolet.

At the end of its run, the CLK-Class was replaced by the more modern C207 E-Class coupe and the A207 E-Class convertible.

At the start of its life, the first generation ran for 6 years from 1997 to 2003 and filled a discovered gap in the market. Two versions were available, a 4 calendar CLK 200 and a 4 cylinder supercharged CLK 230 Kompressor.

After just three short years, Mercedes-Benz reviewed the design and brought forward the 2000 update. This new model featured a new instrument panel, a steering wheel with various control buttons added, revised bumpers and restyled side skirts. Here, customers could add a sports package for the Northern American market only, or an AMG upgrade on the newly issued Cabriolet (2002).