You can find 23 different owner's manuals for the Toyota Tacoma on this page that are in the PDF format. 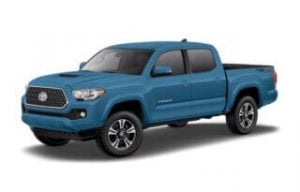 Originally the Toyota Tacoma pickup truck started life as a smaller vehicle back in the 1990s but over the years it has grown substantially.

For example, the length of the Tacoma since its original release has increased by around 15% to give you an example of how it has changed.

These owner’s manuals will tell you everything you need to know about the vehicle.

They have information on maintenance procedures, common problems that arise with the Tacoma, and other useful tips for maintaining your vehicle.

The Tacoma was brought in as a replacement for the famous Hilux range that earned a badge of honor for being near indestructible.

Some of the main changes to the model compared to the Hilux are a higher focus on comfort rather than utility and less payload capacity.

These changes have made it more suited for the North American and Canadian automobile markets who regularly use these vehicles domestically.

The car has shared mechanical parts with other models from the Toyota range such as the Land Cruiser.

In 1998 a TRD package was introduced that turned the modest pickup truck into a sports truck.

TRD versions have always pushed the limits of the trucks with a power output from a supercharged V6 producing 254bhp in 1998 and the most recent producing 304bhp.

Aside from the engine being bolted with a supercharger the TRD version also upgraded the shock absorbers and brakes.

The most recent generation of the Toyota Tacoma was released in 2016 and received a mild face-lift in 2020 adding Android Auto and Apple device connectivity.

Engine choices have always been limited (aside from the sport upgrades) to an inline 4 cylinder and V6 option but buyers have always had the option of manual or automatic transmission.

Although those choices may be limited the trims weren’t, these modern examples of the truck can be bought in one of 10 versions:

Q: Does the Toyota Tacoma come in a manual?

A: The current third-generation model of the Tacoma (as of 2021) is offered with a 6-speed manual or a 6-speed automatic transmission.

Q: Why is the Toyota Tacoma so popular?

A: The Tacoma pickup truck is great for retaining its resale value when properly maintained and serviced. Toyota's are also known for their reliability and great value for money when buying new/used.

Q: Is the Toyota Tacoma good in snow?

A: The pickup truck has almost 10-inches of ground clearance and an incredible array of off-road equipment built-in that should help you with any terrain.

Q: Which is better, the 4Runner or Tacoma?

A: The 4Runner is built for comfort as it is an SUV, whereas the Tacoma is a pickup truck and has a bed in the rear for transporting cargo easily. Both cars share the same chassis with only minor differences to deal with the additional weight of the rear body.

Q: What oil does the Toyota Tacoma use?

A: Modern examples of the Tacoma use synthetic oil. Using synthetic oil also means that you won't have to change the filter and oil as often as you would with non-synthetic oil.